3D Street Art is in fact 2-dimensional. It’s only when you see the artwork from a specific angle it becomes an illusion and it feels like it’s 3D. If you were to stand anywhere but not in the exact right angle the artwork would become hard to understand and give no meaning to its existence. The process described is called anamorphosis.

It is very popular to use 3D Art in advertising. Nickelodeon, Coca-Cola and Fuji are only a few of the most known companies that have been using 3D art in their advertising campaigns. Sometimes 3D artists are invited to various places across the globe to do their art. It’s a great way to attract tourists. Furthermore, museums around the world have used this genre in art to put life to their museum exhibitions. Besides being used in business contexts there are a lot of hobby artists doing it for pure pleasure and amusement.

Today we are having a look at the most amazing 3D street arts of 2012. The content of the collection varies and tries to focus on both larger creations done on huge walls and smaller creations but still very epic to look at.

You should also check out these 3D street arts of 2011. 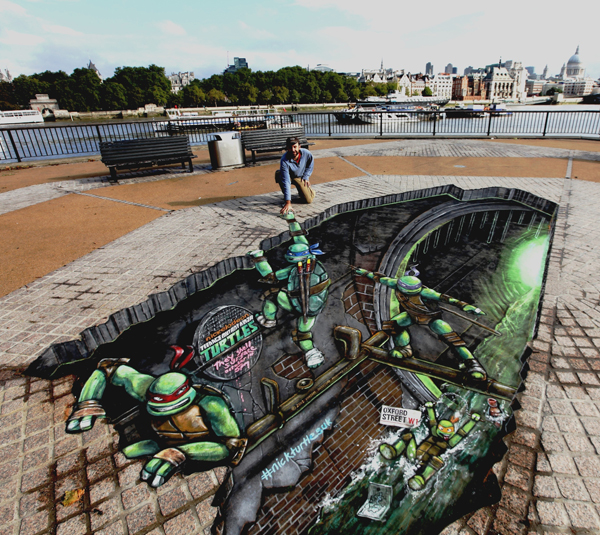 3D Joe And Max created this art for the new Nickelodeon TV seriers of Teenage Mutant Ninja Turtles. All characters of the world famous TMNT can
be found in this artwork. Cartoon meets reality in an extraordinarily
awesome way. 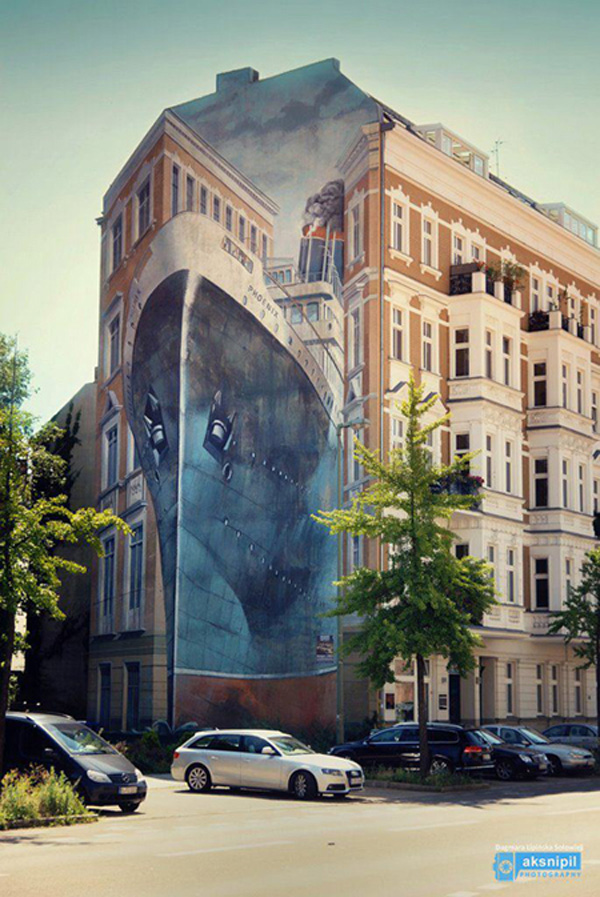 Ship Coming Through is an artwork by Aksnipil which can be found in the capital city of Germany – Berlin. Despite it not being a very realistic artwork, since it has a ship in the center of Berlin, it’s incredibly amazing to look at and the attention to detail in this one is jaw-dropping. 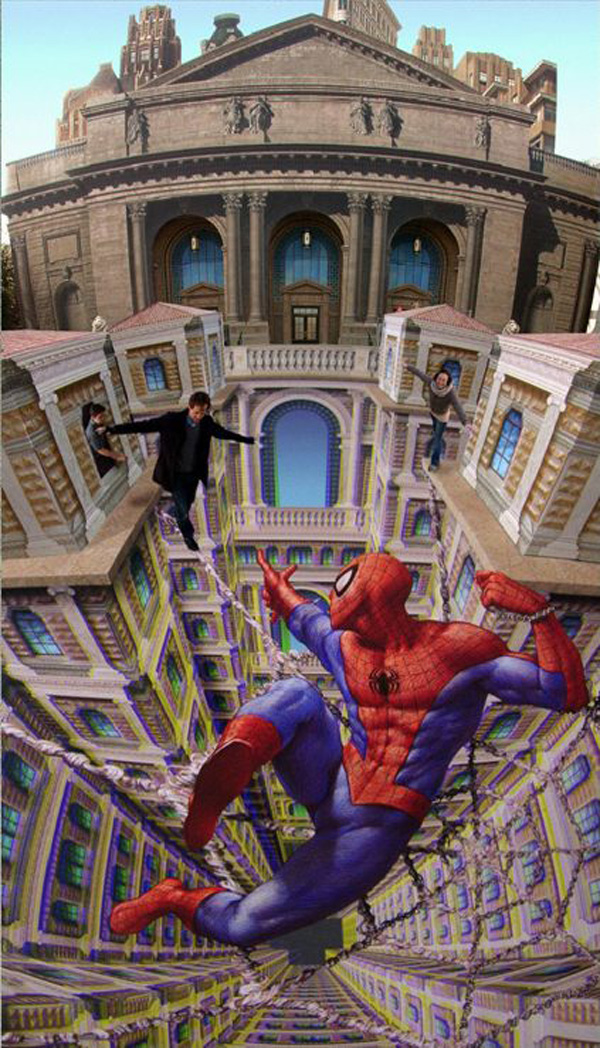 Artwork by Kurt Wenner. Inspired by Marvel’s Spiderman. This is probably one of the most realistic 3D street arts I have ever seen. It’s
very well drawn and you really feel you are high up above the ground as the piece of art tries to reflect on you. 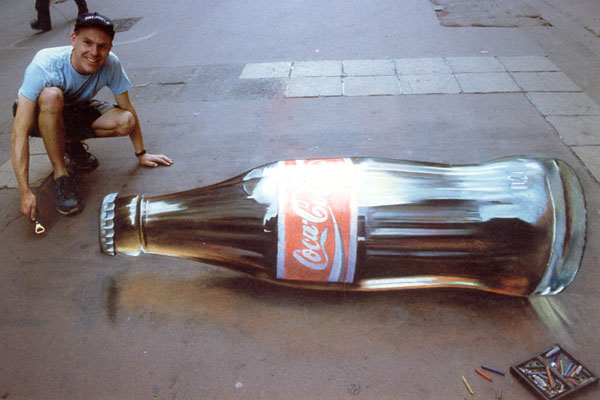 3D Street Art by Julian Beever. As you can see it’s a huge coke bottle laying on the ground. He’ll probably need a larger bottle opener
if he wants to pop the cap open though. The lighting and shadowing is what makes it look like a real bottle. Then the attention to detail is of course a huge part which makes it to one of my personal favorites. 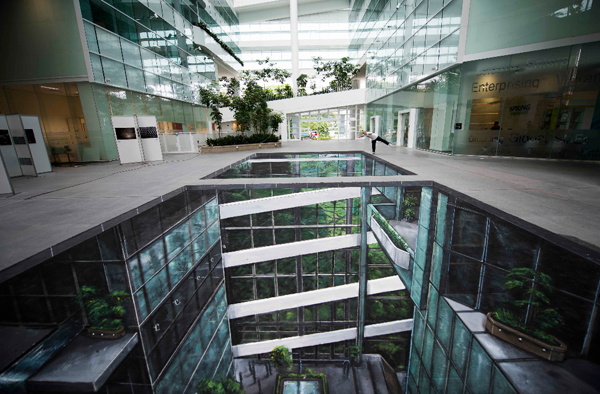 The Solaris Building in Singapore wanted a few extra floors and decided to get help from 3D Joe And Max. This is the result. Very realistic and
epic, just as usual. 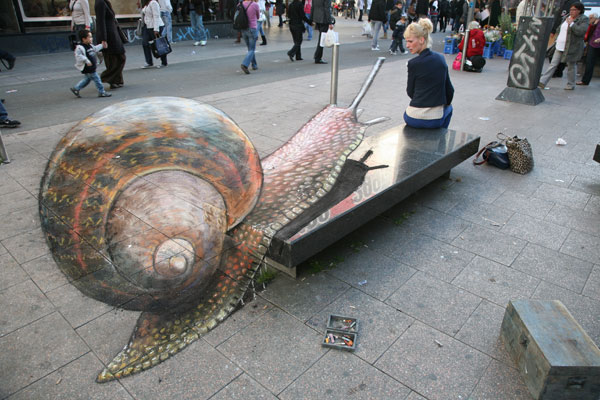 An other 3D artwork by Julian Beever in Times Square. In this one we find a huge snail sneaking up on a woman. Kurt Wenner is the creator of this absolutely stunning 3D artwork. Its scenery is amazing and really makes you feel like you are there – at the Grand Canyon. Amazing 3D art by Edgar Mueller inspired by the Ice Age. Don’t walk on the ice, it may crack, and believe me, you don’t want to fall. 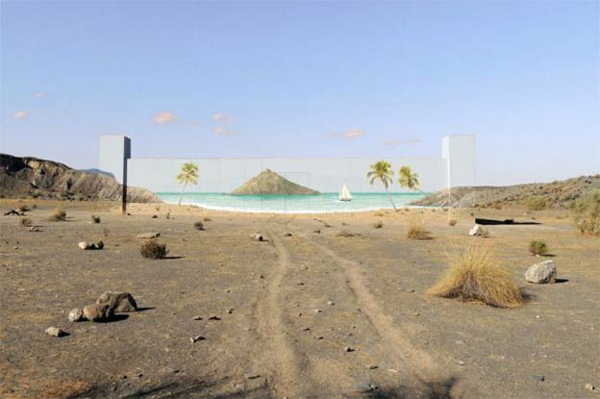 Beautiful beach and tropical island. It was made for a Fuji TV commercial by Orange. If it wasn’t for the dark shadow on the left side it would have been nearly perfect. 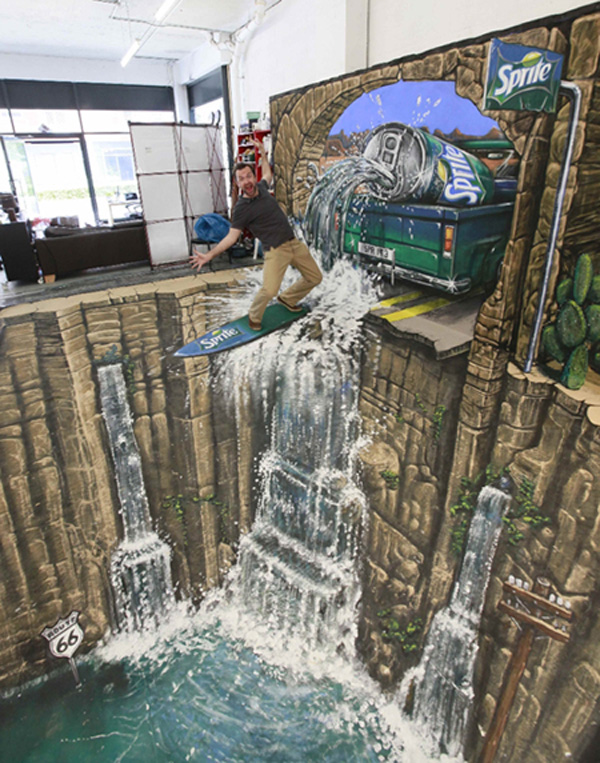 Surf on Sprite soda. This 3D art was made by 3D Joe And Max and was a request by Sprite to use in one of their advertising campaigns.

Hopefully you now have have got an better insight in what 3D art is and we also hope it has inspired you to the things you love. Maybe you have even decided this is something you would like to try out yourself. It of course requires a lot of training but if you are  dedicated and motivated you can achieve anything.

John is the founder of MinePick.com which is a server list for Minecraft. He has a huge passion for design and websites. 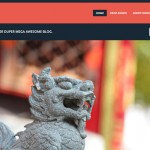 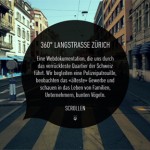