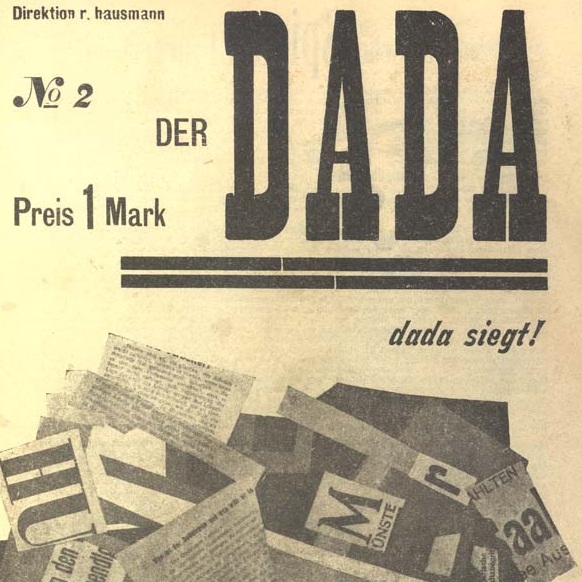 Dada art formed—and reached full force—as a negative reaction to the horrors experienced during the First World War, reaching a peak in the years between 1916 and 1922. Dada, or Dadaism, rejects reason and logic—holding high the ideals of nonsense, irrationality, and intuition. The art form itself envelops a broad span of mediums: from visual, to literary, to theory and theatrics.

Early Dadaist refuted the notion that their works were art; rather, claiming it to be anti-art, conceived to ridicule the meaninglessness of the modern world, as well as those who live within it. Perhaps most characterized and recognized in the form of photomontage—often referred to as collage—Dada is seen to have had a profound impact on the methodology and style of contemporary graphic design.

The process involves clipping and combining existing images from photographs or illustrative posters to create a montage or collage of chaotic images. For Dadaists, this method was a display of anti-propaganda in a world inundated with posters and billings pushing the war effort. Though the original Dadaists claimed there was no meaning in their creations, art scholars have managed to find profound social commentary and critic within the work. Dada art is often linked to surrealism, and is seen to have had a profound impact on the rise of the pop-art movement.

As Dada is considered an era of art, and not simply a form, it is impossible to consider any contemporary work truly Dada; however, contemporary design draws frequently from the appearance of Dada. The photomontage is still a very popular method of design, often seen in poster design and album art.

Although a good photomontage is difficult to create, the successful outcome can typically give the appearance that the work was performed on an amateur level, giving the final product a very independent and anti-corporate feel. Skewed typography, meaning words typed with mismatched font style—typically created by clipping individual letters from magazine headlines—is also an aspect common in photomontage.

As the design method is so closely linked with Dada and the early twentieth century, the look of these modern works can also add a taste of vintage flair. Rob Jones, an artist who has created poster art for several indie bands—such as The White Stripes and The Raconteurs—clearly and effectively makes use of the photomontage method.

The band Franz Ferdinand also implements photomontage in their design work, and the name of their group—a reference to the archduke whose assassination triggered WWI—makes the connection between their image and Dada even more apparent.

With the advent of digital photography and digital photo editing software like Photoshop, the ability to effectively and innovatively produce photomontages found a strong niche; and the ability for anyone to develop professional level design with amateur skills propelled the contemporary use of Dada-influenced imagery further into the popular scene

. In the age of Dada, intricate photomontages were often very large, and the multiple layers of images and alternating paper textures made the works very thick.

The issue of images needing to match size or be reprinted through a complicated printing process also made the practice of photomontage much more complicated. The digital age has solved all these issues, also giving much more allowance for errors and mistakes, as these problems could easily be remedied.

Photomontage also allows for an image to easily dip into the realm of abstraction. The elements of the montage cannot be simply defined or explained, leaving much of the interpretation and story up the viewer. As with the work of the original Dadaists, the perceived meaning is often far from the artist’s intention.

Abstract work requires audience participation, bringing it alive in a way that allows the work to constantly be in a state of change. When approaching a work of abstract design, the viewer will need to give a great deal of their attention to the piece, and work to find their own connection to the work.

The element of abstraction—which requires greater viewer attention—and the fact that the digital age has simplified the process, results in an increased call for the use of photomontage in graphic design. All works of photomontage are unique in nature, and the sometimes bizarre appearance of the images tends to grab attention of viewers faster than typical design methods.

Feelings of nostalgia can be evoked through the exposure to photomontages due to the wide variety of images involved and the retro appearance associated with the technique, further linking the viewer to the work. There is bound to be elements of the design the viewer will recognize—if nothing more than the memory of creating elementary school art projects.

The methods and techniques of Dada art prevail to this day. The idea that design can be meaningless to one person, while possessing strong meaning to another, characterizes the work of the Dadaist. The emotion and ambiguity within a work signify its need for viewer exposure and interpretation. Tools to create such works of art and design are easily available, and modern designers have used these tools and allowed the influence of earlier artists to help guide their work.

Techniques associated with Dada are everywhere: from wine labels and album art, to billboards and web design, the practice of using Dada as inspiration is strong in modern design. With better understanding of the principles and history of Dada, you are sure to find ways to enhance your own practices of art and design creation.