Since the internet has taken over life as we know it, stickers such as these have been falling off the radar of small businesses and organisations as a marketing tool.

In reality, promotional stickers have their place and can have the potential to be a hard-hitting promotional material.

You just have to know how to use them.

Since those who choose to make use of them didn’t quite generate the ROI that they were hoping for, using stickers are often concluded as a poor investment.

Just understand that stickers are not made to generate direct sales; they’re made to increase brand awareness.

Because of this, it’s important to keep sticker designs simple, clean and to-the-point. Don’t try to include too much information or design elements.

If you’re looking for some inspiration, here are examples of clean and minimal designs that are absolutely stunning: Tomomi has really mastered the art of creating an elegant and beautiful sticker, 100% free from clutter and unnecessary design elements.

Remember, keeping the intended use/location (wall, car, cat, etc) of your sticker in mind during the design process will help you make better design decisions like Tomomi. 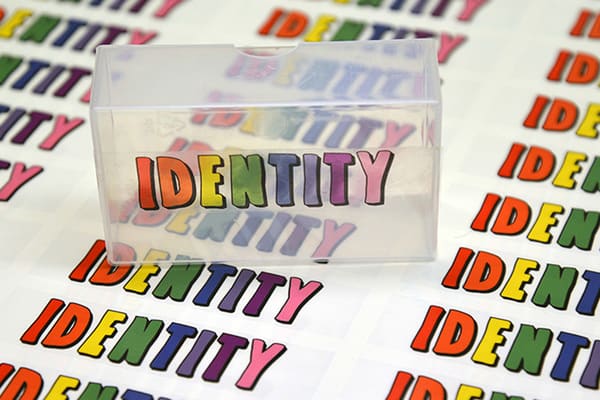 People often forget that one option when it comes to printing stickers is to have them printed on clear plastic.

This is exactly what Identity has done with these stickers, and as you can see, it looks stunning.

You can imagine how well these stickers would work on just about any item, as the varying colours will ensure that the stickers stand out, no matter what. 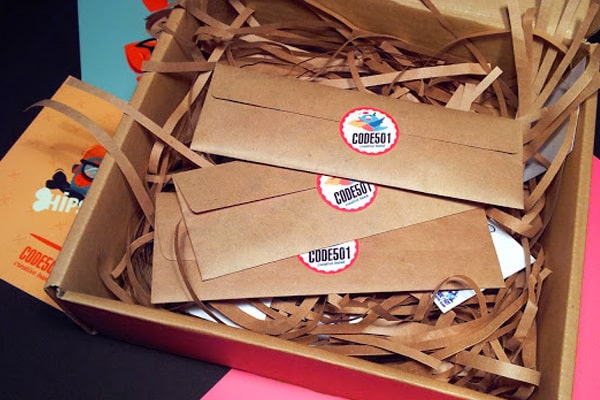 These stickers from Code501 might be a little less minimalistic than the last couple of examples, but they’re still wonderfully clean and uncluttered.

They feature a minimal amount of information (as all stickers should), along with a beautiful red and white colour combination for the background/border.

The name of the organisation they’re promoting (Code501) is large, bold and clear, making it easily decipherable from a distance.

The colourful image used in the centre of the sticker further helps to create an eye-catching design, too. 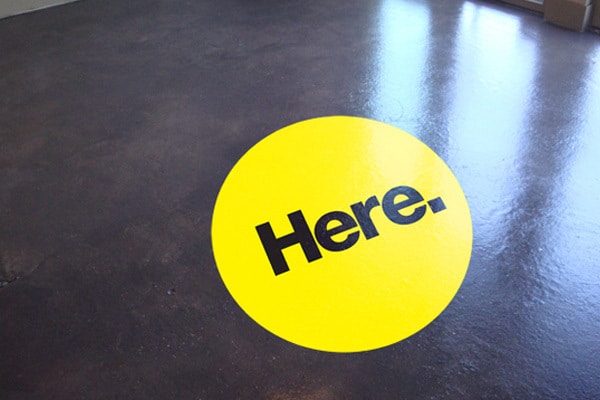 Stickers don’t always have to be small, as is demonstrated by this huge floor sticker from the design agency: Here.

It doesn’t get much more minimalistic and simple than this, as the sticker is nothing but a round yellow circle with the word “Here” on it.

Despite its simplicity however, the sticker is beautifully crafted and the yellow design really stands out from the black floor behind it.

The intention of the sticker is simply to let people know that they are, in fact, “Here” (“Here” meaning at the companies offices). 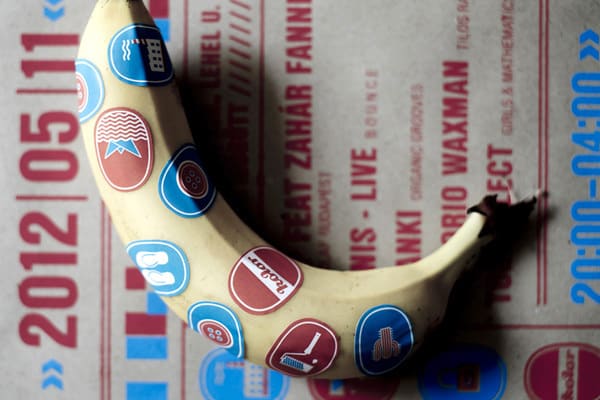 If you’ve ever purchased a banana from the supermarket, you might have noticed a little sticker stuck to each one.

Not only is this common practice with bananas, but also with Apples and other fruit; rarely are these stickers so elegantly crafted, though.

These stickers have been intentionally designed in blue and red, which are perfectly contrasting colours when placed against the yellow skin of the banana. It’s this contrast that helps them to stand out.

Pawn has created an exceptionally modern and minimalistic sticker design here, as it features nothing but a stunning image with an almost stencil-like design added over the top.

It’s this stencil-like design that actually blocks out certain portions of the background image to portray the word “Pawn” in white lettering.

It also portrays an image of a pawn (the chess piece) within the letter “A”.

It’s a clever design that gives a unique and eye-catching look to the stickers. Change the World in 366 Days created a beautiful set of stickers as shown in the image above.

These stickers are all slightly different and make use of various different sizes and background colours, but they’re all tied together with the consistent use of typography and styling.

They’re extremely simple stickers, and feature nothing but one word written in white lettering on a coloured background.

It’s this simplicity that makes them so eye-catching, though. 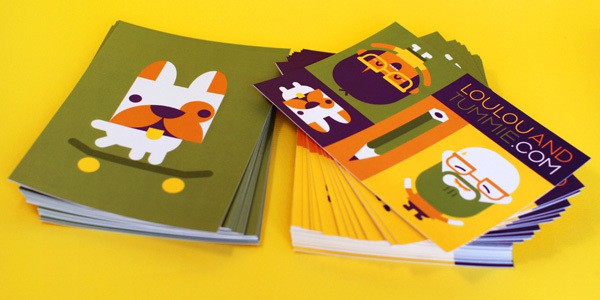 You can see from the sticker on the left that the designs are extremely simplistic. For example, this sticker features nothing but a cartoon dog on a skateboard, on a beautiful green background.

The stickers on the right are similar, although combine multiple designs into one.

There are only a handful of colours used throughout all of the stickers (i.e. yellow, orange, two shades of green, blue). 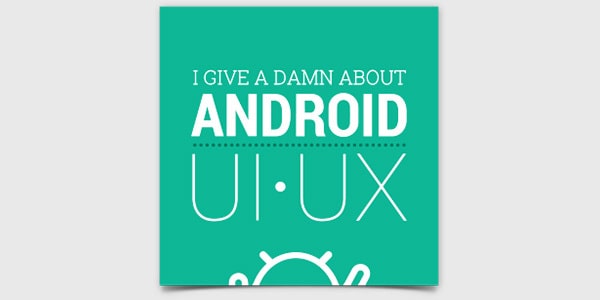 These gorgeous Android stickers cater to the growing Android fanbase, who are extremely passionate about the OS.

They’re about as simplistic and minimalistic as stickers get; they make use of an eye-catching green colour for the background with white text in the foreground, and they also feature a simple illustration of the iconic Android robot at the bottom.

It looks as though two typefaces have been used (one of which has been used in two different font weights) to present the simple yet clear message: “I give a damn about Android UI/UX”. 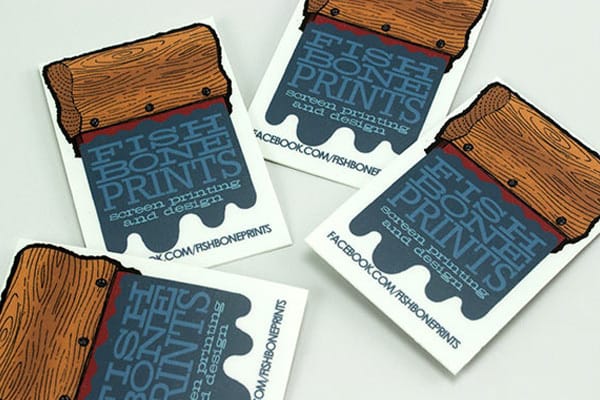 Fish Bone Prints has created a relatively simple and straightforward sticker here, but nonetheless, it’s still beautifully designed and would certainly catch your eye from a distance.

It’s a regular rectangular sticker featuring the name of the company, what they do (screen printing and design), and their Facebook fan page URL.

It’s clear that the intention of these stickers is to introduce people to the brand, and encourage them to follow the company on Facebook.

That’s why they’re kept simple and to the point without distractions. Bitly is a popular URL-shortening service with millions of users, and like Android, a loyal fanbase.

When you have a loyal fanbase like this, stickers are the perfect marketing material, as they allow you to utilise existing fans to create brand awareness.

These stickers are simple and do nothing but introduce the name of the brand, along with some quirky/fun imagery.

They’re extremely bright and eye-catching, and you can imagine that their loyal followers would be happy to make use of them to fly the flag for the brand. 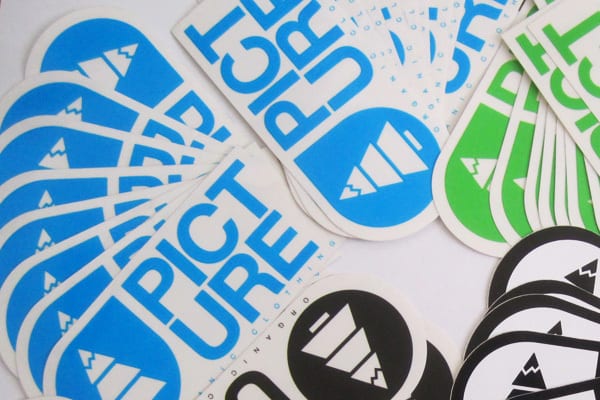 Picture Clothing has opted for some extremely simple and to-the-point stickers here, with the simple intention of creating brand awareness for the company.

You’ll notice that each sticker makes use of just one colour (along with white) and features nothing but the words “Picture Clothing” along with the brand emblem.

The company created a series of these stickers, all in different colours, which gives their fans the option to choose whichever coloured sticker they prefer. Github is another brand much like Android and Bitly that has a loyal following of developers, coders and hackers around the world.

Because of this loyal following, stickers are once again the perfect marketing material for creating brand awareness, as loyal fans are always happy to fly the flag for the brand.

These stickers are extremely simple, and feature nothing but the logo of the brand.

The shaped white background on which the stickers are printed helps to ensure that they work beautifully on whatever colour surface they’re applied to. HTML5 is yet another example of a “brand” with loyal followers, so once again, we see stickers that go down the route of featuring nothing but the brand logo/emblem.

However, HTML5 also created another larger sticker (the big blue one in the upper left corner of the image), which not only features the brands logo, but also a slogan.

The slogan reads, “I’ve seen the future, it’s in my browser”.

Sure, it might seem like a geeky slogan to someone outside of the HTML5 community, but it’s the sort of slogan that will appeal to early adopters (i.e. those that love nothing more than flying the flag for the brand), thus making it the perfect sticker for creating brand awareness. Croque Madame is a modern and luxurious brand (as you can tell from the image of their branding above).

You can see the sticker they’ve created in the top left-hand corner of the image; they feature nothing but the brand emblem (i.e. the chunk of meat with a shoe on); they are also black and white and feature no colour whatsoever.

While most stickers tend to use an abundance of colour, sometimes, black and white can be just as eye-catching.

What’s more, it doesn’t pay to force colour into your sticker design if it doesn’t work for your particular brand, which would certainly be the case for Croque Madame.

Bio: Joshua is a minimalist at heart. He works with clients from around the globe to create beautiful, minimalistic designs that get the job done without the need for clutter. He also loves technology, and is currently planning to launch his own technology blog in the near future. 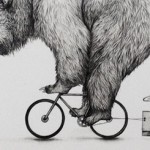