Creative Suite 4 is about to be released. But from what I’m reading of it, I think I’ll stick to CS3 for a while yet. Those lucky enough to have received early BETA releases (alas, not me) have reported a few minor improvements, as you’d expect. But with Adobe’s hefty upgrade bill, it hardly seems worth it. Which brings a whole new angle to the upgrade/not upgrade argument. When is it advisable to upgrade, and how long is too long to wait. 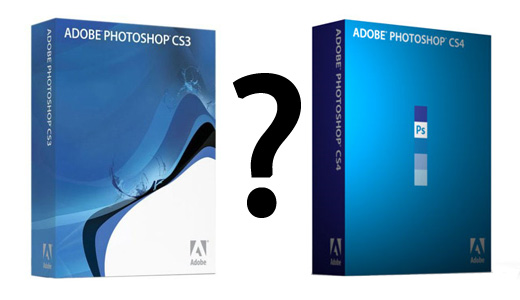 One of the biggest expenses for any lone designer is software. Creative Suite, although there’s a great saving by buying the bundle, is still not cheap. But unlike spending money on plant or equipment, which can pay for itself over the years, there seems to be a major software upgrade almost annually.

Every time a new version comes out, there are many emotions running through my head, usually tempered with more pragmatic considerations.

For one thing there is the eagerness to find out what’s new. Then there is the urge to be up with the latest innovations. Nobody likes to be saddled with an ‘old model’. Finally there is the feeling – if an upgrade is delayed – that others are enjoying benefits that you, yourself, are missing out on. Or in other words, while you’re still toiling away for half an hour performing a regular function in your software, your opposition can do it in five minutes because… she upgraded!

But the reality is different.

Take Photoshop, for example. The tools that I use daily have all been there for years. Sure, some of the new CS2 and CS3 innovations are handy – such as the Refine Edge tool for selections. But did I miss it back when it wasn’t there? Not really.

Let’s face it, most of us are happy with what he currently use, and when we do upgrade, we continue using the tools we’re used to, and only a fraction of the new stuff that comes in the box.

So why upgrade at all?

For one thing, if you are in the position to receive files from others, there is a credibility danger in having to tell people ‘could you please save as version such and such?’ Then, if like me you’re a trainer or a teacher, you have to be up todate, or risk losing clients.

But for most applications, the only real motivation to upgrade is to avoid falling too far behind. Every day I receive emails from people wondering if my tutorial (created in Photoshop CS3) can be completed in Photoshop 7, or some such. Then there is the job aspect to consider. If you’re happy plodding along with Indesign 3, but then apply for a job at an agency which is right up-to-date, you risk a black mark against you. Sure it’ll only take you a day or two to come up to speed on the new version, but there’s that credibility thing again. Finally, if you get too far behind, there really is that fear that you’re slower or less effective because (who possess the latest software) have an unfair advantage over you.

So it’s really up to you. My advice would be to wait until a new version is out, and then upgrade to the next-to-latest version. For the past year or so I have seen sealed versions of Creative Suite 2 available on the online auction sites for some hefty savings.

Oh, I’d just like to point out one major gash in the side of the upgrade/not upgrade argument. It’s called InDesign. Unlike Illustrator, you cannot save an InDesign file in an older version, and no version will open a file created in a newer version. There is an EXPORT option called InDesign Interchange. Recently I received a commission to create several InDesign templates for a company. But I was on CS3 and they only had CS2. Worse, as I’d upgraded from 2 to 3 and changed from PC to Mac at the same time, I didn’t have the option of reinstalling the old version (license allowance notwithstanding). So I had to EXPORT these templates for this company – and what a disaster. Only later did I read the Support files and the forums, all of which told of countless problems inherent in the exercise, not the least of which was the total collapse of Paragraph Styles.

The lesson learned? As this company owned several hundred licenses for InDesign and was unwilling to upgrade, it was probably up to me to ensure I maintained a workable older version somewhere.

No posts match the widget criteria

Please check if there are posts that match all the below criteria. If not, remove the wrong ones in the widget settings.